Scotland’s hopes of making it to the Euro finals in France next summer are hanging by a thread following a 3-2 defeat by world champions Germany at Hampden. 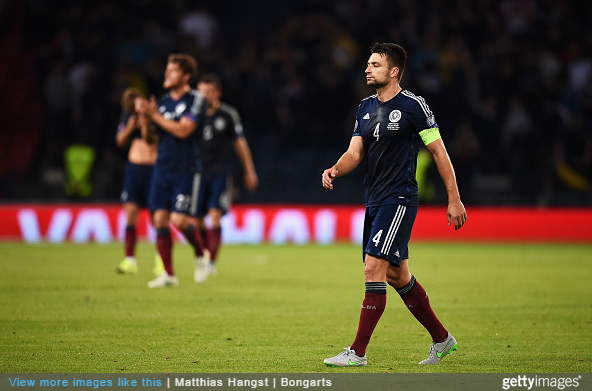 The Germans’ passing and movement was superb throughout and on 18 minutes, they took the lead when Thomas Muller’s shot deflected past David Marshall and into the Scot’s goal.

However, the hosts found themselves level just 10 minutes later, when the usual dependable Manuel Neuer pushed a Shaun Maloney into Mats Hummels, with the ball rebounding into the back of the net.

Muller didn’t wait long to restore his side’s lead, with the Bayern Munich man nodding in from close-range.

But once again, against the run of play, the Scots fought back, with James McArthur firing home after a corner.

After the break, the Germans continued to dominate possession, with the likes of Mesut Ozil, Tonu Kroos and Ilkay Gundogan giving a masterclass in passing,

Then, on 54 minutes, the Germans produced a superb team move, with Dortmund’s Gundogan netting what would be the winner.

Gordon Strachan’s men did their best to get back on level terms but ultimately they were well beaten (despite the scoreline) by an outstanding German side.

With Poland hammering Gibraltar and the Republic of Ireland nabbing a precious 1-0 win against Georgia, the Scots are fighting for their lives in Group D.  In order to secure third spot and a play-off place, they need to take four points from their final two games against Poland at home and Gibraltar away and hope the Irish get nothing from their tricky clashes with Poland and Germany. Still all to play for! 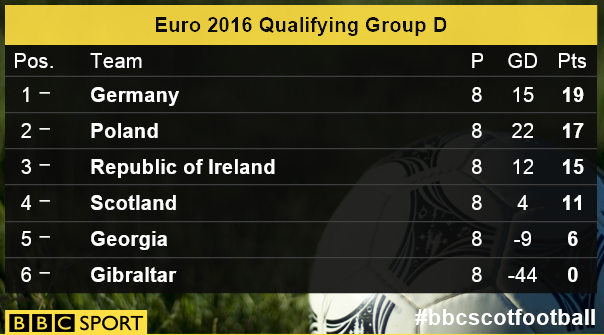