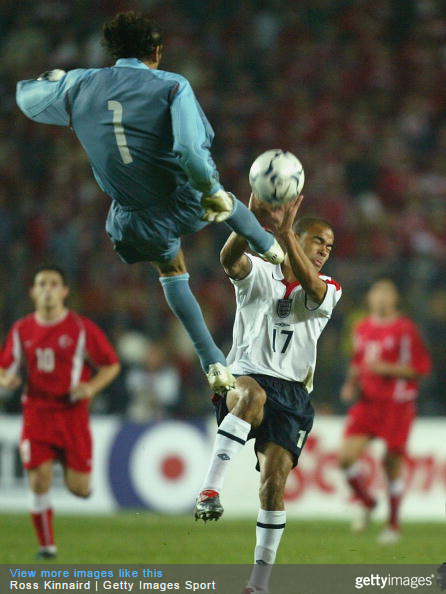 England just about managed to secure their safe passage to Euro 2004 with an ill-tempered 0-0 draw against Turkey in Istanbul back in October of 2003.

The general miasma of hostility was perhaps best summed up by the decapitation job attempted by Turkey’s war-painted goalkeeper, one Rüstü Recber, on poor little Kieron Dyer – who really wouldn’t harm a fly unless it was playing on the same team as him and refused to pass…

Thankfully, despite getting kicked in the gullet, Dyer escaped with just minor cuts and bruises and is still, as far as we know, alive and well today.

As mentioned above, the game finished goalless with a special effort made by David Beckham to keep it that way – the Real Madrid man sending a 37th-minute penalty thrashing into the ionosphere, thus singularly failing to capitalise on Steven Gerrard’s heroic dive…