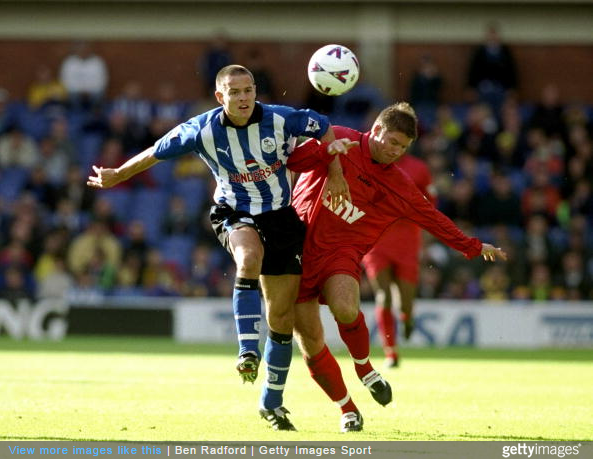 It hadn’t been a good start to the 1999/2000 Premier League season for Sheffield Wednesday. Over the course of the first nine games of the campaign, the team had failed to chalk up a single win.

On the way they’d also managed to get themselves thrashed 8-0 by Newcastle and, going into their game against Wimbledon, hadn’t found the net in the previous 529 minutes of football.

Things were looking bleak, but all that changed on 2nd October, 1999, when the Dons pitched up at Hillsborough.

Wim Jonk put The Owls ahead after nine minutes, only for a fortunate deflection off John Hartson’s inner ankle to level the score five minutes later.

Belgian striker Gilles De Bilde then scored his first Premier League goal (after over eight hours of trying) to put Danny Wilson’s side 2-1 up halfway through the first half.

After the break, a three-goal burst in the space of 20 minutes saw Wednesday secure the points. Petter Rudi made it 3-1, De Bilde got a second and then Gerald Sibon capped a much-needed victory off with an injury-time strike to make it 5-1…

The victory proved to be a rare ray of light in a dour season for Wednesday.

Indeed, they would not win again for another eight games, and finished the season in 19th place, which saw them drop out of the Premier League (along with 18th-placed Wimbledon) for the first time since its formation in 1992/93.