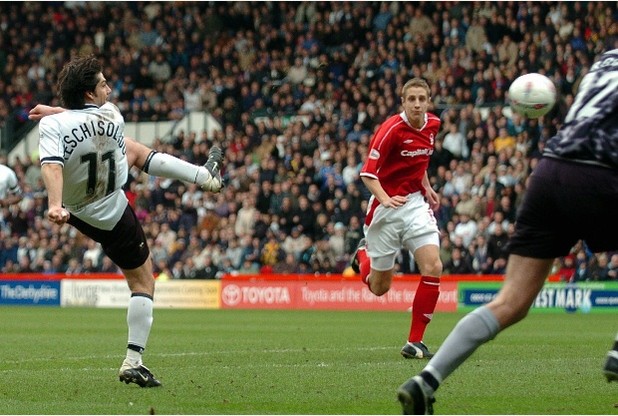 Tonight is the first Nottingham Forest-Derby game of the season – a fixture that will almost undoubtedly bring with it a new, fresh set of painful memories.

Derby are coming into the game bang in form and firing; Forest bang out and limping. A double-figures massacre is a distinct possibility.

Anyway, with the A52 derby in mind, Pies thought we’d traipse back to the murky netherworld of 2004 in order to revisit a similarly sore experience at Pride Park.

Derby metered out a 4-2 pasting in the end but were only 1-0 up when a slapstick incident occurred that would serve as a physical manifestation of the decade of woe and underachievement Forest were about to embark upon.

Under pressure, Forest centre-back Wes Morgan rolled a seemingly harmless pass back to his goalkeeper, one Barry Roche.

Sadly the trundling pass was intercepted by diminutive Derby striker Ken Co, who foiled Roche’s attempted clearance and ensured the ball squirmed awkwardly to arch-goalhanger Paul Peschisolido, who was left to volley into a completely vacant net…

“I saw the ball bobble and come off the keeper’s shin, and I thought ‘it’s Christmas’,” said Peschisolido after the game.

Roche was less enthused, telling reporters: “I’m devastated. I’m sure it will be run and run on A Question of Sport.”

As for Ken Co, in the absence of any actual club heroes, Derby had his likeness immortalised in cardboard and placed in situ on the Pride Park pitch, where he remains to this very day*… 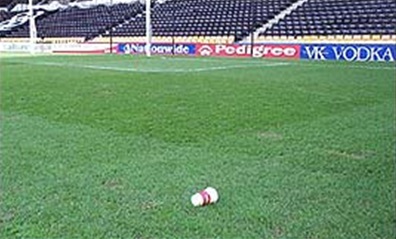