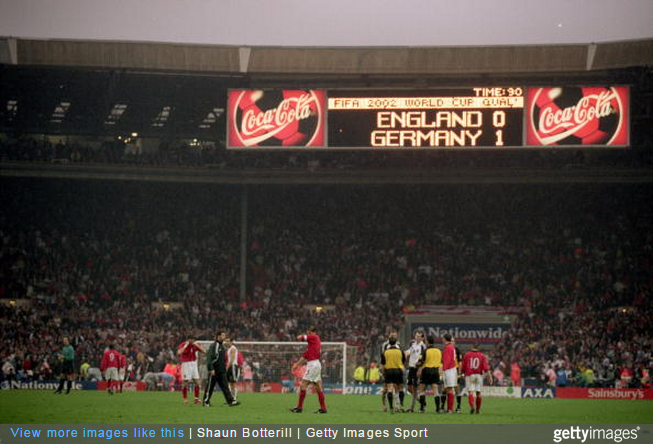 On a day in which symbolism was always going to be writ large, the famous old twin-towered Wembley Stadium signed off from active duty with an England defeat against Germany in a World Cup qualifier.

The rain lashed down on a grotty old afternoon as David Seaman’s lapse positioning gifted an early goal to Dietmar Hamann and coach Kevin Keegan’s tactical limitations – already under scrutiny following a miserable showing by England at the 2000 European Championships – were once more exposed.

England were lacklustre all afternoon while Germany, under new coach Rudi Voller, played with zip and resilience.

As the game meandered towards its increasingly inevitable conclusion, the German fans struck up a lusty chorus of “Football’s Coming Home”. No sense of humour, apparently.

After the game, Keegan resigned in the Wembley toilets.

Your humble correspondent heard the news with hordes of other depressed England fans in the North Star pub in Swiss Cottage.

It got the biggest cheer of the afternoon.