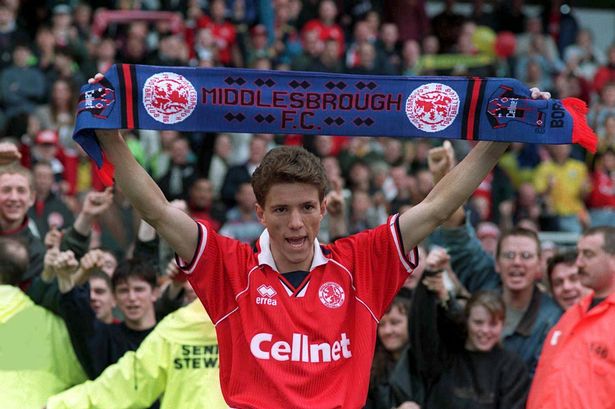 If ever evidence were needed that English football was changing, it came on 8th October, 1995, when 22-year-old baby-faced Brazilian starlet Juninho swapped the hustle and bustle of the world’s thirteenth largest city, Sao Paulo, for the somewhat contrasting, altogether more industrial pleasures of Middlesbrough.

In 1995, Boro were on the up. Bankrolled by local-lad-made-good Steve Gibson and managed by Bryan Robson, the team had won promotion to the moneyed Premier League and the exotic signing of the Brazilian star caught the imagination of the public on Teesside and beyond.

The diminutive playmaker made his debut against Leeds, taking just 11 minutes to bed into the Boro side by playing in Jan Aage Fjortoft to score the opening goal with a perfectly weighted through-ball.

The game finished 1-1, but the central performance of their new Samba star was all anybody of a Smoggie persuasion was talking about after the final whistle.

Juninho’s contributions helped Boro finish 12th in that first season, and in the following campaign he linked up with Fabrizio Ravenelli as Bryan Robson’s ever-evolving side turned in some exciting, attacking performances that took them to both the League Cup and FA Cup finals.

Unfortunately, Juninho couldn’t help Boro secure victory in either, nor could he keep them from being relegated after just two seasons back in the top flight.

The Brazilian left for Atletico Madrid in 1997, but returned to Teesside on two separate occasions after that, helping the club to its only major trophy win in the 2004 League Cup Final.

In total, he made 125 Premier League appearances for the club and in 2013 was voted by the Middlesbrough Evening Gazette as Boro’s second greatest ever player, behind Robson.

It’s not hard to see why…