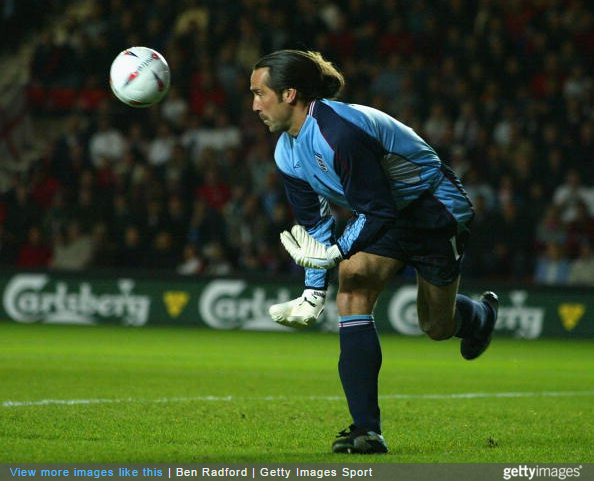 It wasn’t the way he would have wanted it to end – in fact, David Seaman will be very disappointed about the manner in which his long and largely unblemished international career came to an end.

After 75 caps won between the sticks for his country, the Arsenal and England goalkeeper bowed out by letting a goal in straight from a corner against Macedonia.

The game was a Euro 2004 qualifier at Southampton’s St Mary’s Stadium, and it proved an embarrassment for the home side.

Early on, the visitors’ Artim Sakiri sent over an inswinging corner that Seaman allowed to drop behind him into the net…

This coming just a few months after Seaman had previously suffered at the hands of outrageous fluke when Ronaldinho’s infamous miss-hit cross had wrong-footed him during the 2002 World Cup quarter-finals.

Anyway, England managed to equalise against Macedonia through David Beckham just two minutes later, but fell behind again on 24 minutes. Steven Gerrard then pulled another one back shortly before half-time but was to be eventually stretchered off on a forgettable night for England.

In the second half, Macedonia tested Seaman from distance and the keeper was subjected to ironic jeers from the home crowd when he gathered up the optimistic efforts.

The game finished 2-2 and the national press were predictably baying for blood; David Seaman’s to be precise – and they duly got their wish, as Sven Goran Eriksson placed his faith in the ultra-reliable David James as England’s new No.1.

As for Seaman, the Macedonia game proved to be a miserable dead end for a goalkeeper who had served his country with distinction for 14 years.