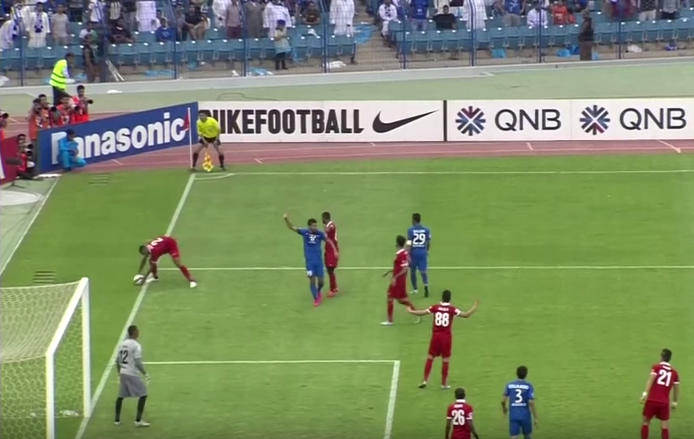 A little bit of clanger-dropping action from Tuesday night’s Asian Champions League clash between Al-Hilal and Al-Ahli now, mainly concerning a penalty which the latter team managed to concede in spectacularly ludicrous circumstances.

The nonsense began when Al-Alhi defender Salmin Khamis jumped the gun in his attempts to shepherd a loose ball out over the touchline.

With the ball spinning to a standstill on the line, Khamis took the law into his own hands (quite literally) and picked it up in an attempt to force a goal-kick – despite the fact that the last touch appeared to come off him anyway.

Sadly for our incredulous hero, the referee happened to notice that the whole ball hadn’t cross the whitewash and immediately awarded Al-Hilal a penalty for handball…

Fittingly enough, the daft spot-kick was missed by midfielder Carlos Eduardo (or rather saved by Al-Ahli ‘keeper Ahmed Mahmoud) as the game ended in a 1-1 draw.