The Republic of Ireland secured an incredible 1-0 win against World Champions Germany in Dublin on Thursday night, a result which secures the Boys in Green a play-off place at the very least. 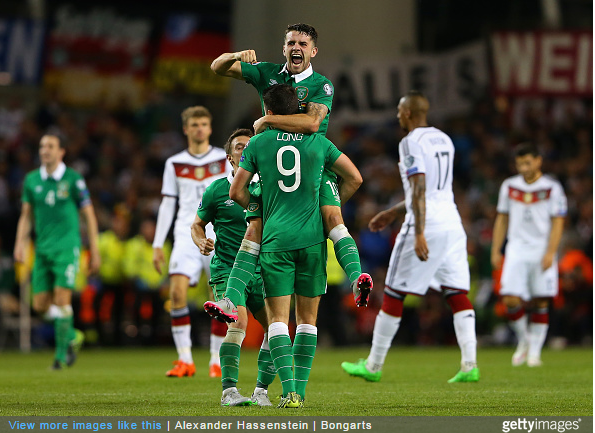 The Germans, unsurprisingly, dominated for large periods of the game, with Jerome Boateng amongst others guilty of missing decent chances.

Bayern Munich schemer Mario Goetze was forced off with injury after just 35 minutes, with ex-Chelsea wideman Andre Schurrle his replacement.

Ireland were then forced into a change of their own on 44 minutes, with Shay Given forced off with injury to be replaced by West Ham’s Darren Randolph.

The visitors continued to threaten the Irish goal, with Ilkay Gundogan, Thomas Muller and Schurrle fluffing their lines.

However, Martin O’Neill’s men stood strong (and rode their luck) before Randolph’s upfield punt found another sub, Shane Long, with the Southampton striker blasting home to give the hosts a shock lead with a goal Jack Charlton would’ve been proud of!

Germany continued to push for a goal but ultimately the Irish held on to secure an incredible victory which puts automatic qualification into their own hands.

O’Neill’s charges now find themselves level on points with second-place Poland in Group D and only a point behind leaders Germany. A win for the Irish away to Poland at the weekend would see them nab an automatic qualification berth, while a draw where the Boys in Green score two or more goals will also see them avoid a play-off place. Still, it’s one hell of a finish from the Irish!