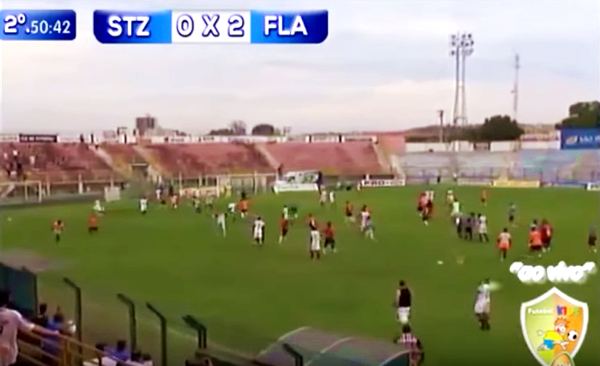 It’s refreshing to know that the youth football scene in Brazil is just as nuts as the senior game, with the recent Under-20 game between Sertaozinho and Flamengo de Guarulhos ending amid suitably chaotic scenes.

Shortly after Flamengo had registered a fairly ordinary 2-0 win, the game quickly descended into anarchy as scuffles broke out across the pitch.

The kicks began flying as Flamengo accused Sertaozinho’s coach of shoving their players, with a mass scuffle following swiftly thereafter in which the referee administered a grand total of 11 red cards – six for Sertaozinho and five for Flamengo.

According to Globo’s match report, Flamengo claimed that Sertaozinho fans had jumped over the wire fences at pitchside to assault their players, with the ballboys and some of the home side’s coaching staff also accused of attacking the away side.

Fla also said that stones were pelted at their team bus as they fled the scene.

Meh. Sounds like a fairly regular weekend in the wacky world of Brazilian football.