A much-changed England coasted to victory in Vilnius on Monday night, a result which sees the Three Lions become only the sixth side in history to register a 100% record in their Euro qualifying campaign. 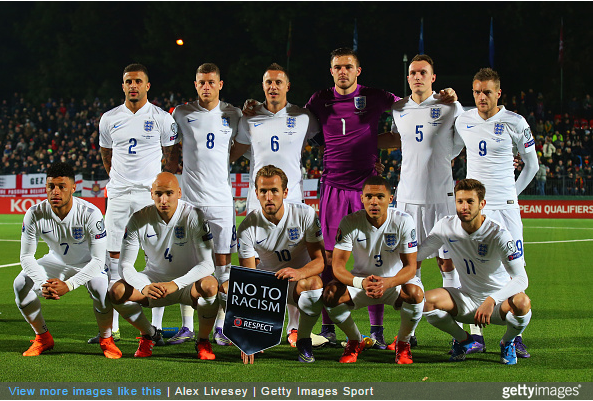 Starting with Jonjo Shelvey in a deep midfield role and Jamie Vardy on the left, the English dominated the game although the plastic pitch did make for some misjudged passes.

Just before the half-hour mark, the goal eventually came for the visitors, with a deflection helping Ross Barkley’s effort into the back of the Lithuanian net.

Harry Kane had already tested goalkeeper Giedrius Arlauskis when his shot on 35 minutes hit the post before rebounding back off the ‘keeper and into the back of the net.

After the break, the hosts improved but it was Roy Hodgson’s men who would score again, with Alex Oxlade-Chamberlain blasting home after a through-ball from Kyle Walker.

Jack Butland in the England goal was a spectator throughout as the hosts rarely threatened.

Roy Hodgson sent on Danny Ings, Dele Alli and Andros Townsend as the visitors ultimately strolled to their 10th win of the campaign.

However, with such weak opposition on the road to France 2016, it remains to be seen just how good this latest Three Lions’ squad is.