Jamie Vardy’s incredible season continued to blossom at the King Power stadium on Saturday, with the Leicester striker netting for the ninth game in a row. That run makes the England man the first player to score in nine Premier League games in a single season, while only Ruud van Nistelrooy has netted in more consecutive games (10 in 2003).

The in-form forward struggled against an organised Watford backline in the first-half, with the visitors the better side before the break.

The Foxes took the lead early in the first-half, but only courtesy of a helping hand from Hornets’ ‘keeper Heurelho Gomes. The ex-Tottenham man has been in fine form this season for Watford, but on this occasion, he somehow let Ngolo Kante’s weak shot slip through him.

Then, on 65 minutes, Vardy’s goal came, after the man himself was felled in the box by Gomes. Regular Leicester penalty taker Riyad Mahrez handed the striker the ball, with Vardy firing home a record-breaking strike to put his side 2-0 ahead.

Watford did one back on 75 minutes, with Troy Deeney netting from the penalty spot after Juan Carlos Paredes had been fouled by Kante.

However, in the end, Claudio Ranieri’s charges held on to secure a victory which sees them, at least temporarily, move level on points with league leaders Manchester City. As for Quique Flores’s Hornets, they stay 11th.

Man of the moment Vardy now needs to find the back of the net in his next game for the Foxes to equal van Nistelrooy’s 10-game record scoring run. What an incredible season late bloomer Vardy is having. 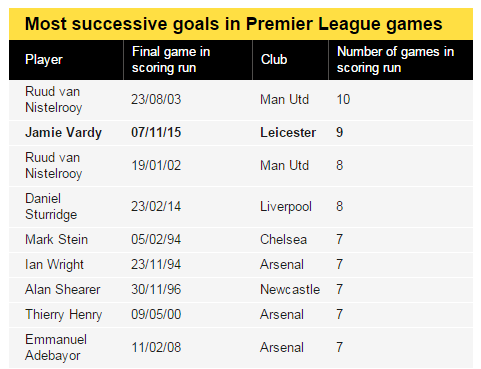