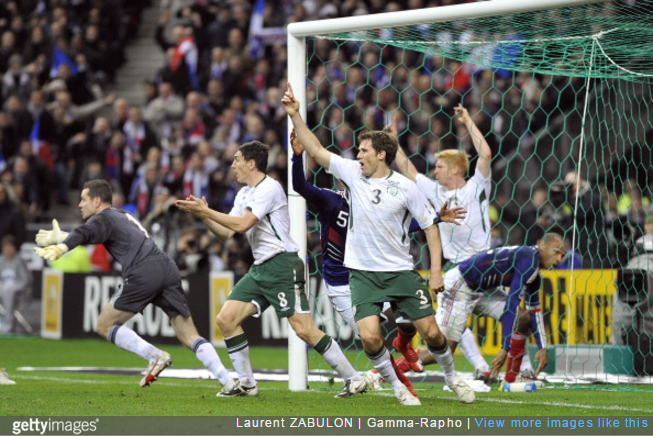 On this very day in 2009, Thierry Henry became public enemy No.1 in the Republic of Ireland after a controversial incident that marred the closing stages of the second leg of their World Cup qualifying play-off against France in Paris.

Deep into extra-time, with the tie all-square, Henry flapped an errant hand at the ball not once but twice before squaring it for William Gallas to nod home and send the Republic crashing out of the reckoning.

The double handball was bad enough, but Henry’s unabashed celebrations rubbed coarse granules of sea salt in the wound.

His attempts to console Ireland stalwart Richard Dunne at the end of the game left a further bad taste in the mouth.

The goal stood, but Henry was branded a cheat. The argument about whether it was more professional to fess up or to keep schtum will continue to rage, but journalists such as Henry Winter spoke of their “disgust” at seeing a player of Henry’s calibre stooping to gamesmanship in order to win a match, however crucial.

A merdestorm followed. The Irish people (not all of them, you understand) protested against the “cheating French bastards” by urinating on baguettes in supermarkets. True story.

Subsequently, there was talk of getting the game replayed, but FIFA rejected the requests and the FA of Ireland didn’t push it. It emerged earlier this year that the FAI had accepted a €5million “loan” from FIFA in return for not proceeding with any legal challenge.

FIFA said it was a loan to help with the building of a stadium, to be repaid if Ireland qualified for the 2014 World Cup. The Republic didn’t make it, and FIFA conveniently wrote the “loan” off.

The FAI later said it accepted the money “to avoid a long, costly and protracted legal case”.