At an electric Aviva Stadium on Monday night, the Republic of Ireland produced an outstanding display to beat Bosnia & Herzegovina 2-0 on the night and register a 3-1 aggregate scoreline, a result which sees the Boys in Green take their place in next summer’s Euro 2016 finals in France.

Martin O’Neill left the fit again striker Shane Long on the bench, alongside John O’Shea who returned from suspension. However, the Ireland boss did find a place for Jonathan Walters, who replaced Stephen Ward in the starting 11.

After a tense start to the game, both sides pushing an opening goal. Then, on 20 minutes, Bosnian captain Emir Spahic picked up the game’s first booking after a meaty challenge on Jeff Hendrick.

Soon after, the Irish got a massive slice of luck when Daryl Murphy’s ball into the box barely brushed off Ervin Zukanovic’s arm in the box. Dutch ref Björn Kuipers immediately pointed to the spot in what was a very, very harsh decision.

Ireland 1-0 B & H – A handball and a Walters penalty separates the 2 at HT Harsh penalty? Courtesy: Sky pic.twitter.com/46QAGQd9i8

Stoke striker Walters held his nerve and fired past Asmir Begovic to put the Irish 2-1 up on aggregate.

Spahic could’ve seen red when the Hamburg defender clashed with Wes Hoolahan after Miralem Pjanic had accidentally caught Glen Whelan with a boot in the face. Howeber, the Bosnian captain escaped a second yellow.

The Irish were almost handed a second before the break, when Hoolahan closed down Begovic and almost nicked a goal.

For the second period, Muhamed Besic came on for Edin Cocalic. The change seemed to energise the visitors, who looked far sharper. As the pressure increased, Ciaran Clark was forced to head clear from a dangerous Haris Medunjanin free-kick.

On 55 minutes, O’Neill sent on Long and James McClean for Hoolahan and Murphy. However, the Irish started to drop deeper as Bosnia looked for an equaliser. However, Spahic was then lucky not to see red after a ridiculously high challenge on Walters.

But then, on 70 minutes, the Irish doubled their advantage, with Walters producing a superb, controlled finish after a Robbie Brady free-kick was deflected into his path. Unsurprisingly, that goal sent the Aviva wild.

Long then found himself one-on-one with Begovic. However, under pressure for Spahic, the Southampton striker failed to make the most of the chance.

Bosnia again tried to get back into the game, but time and time again they failed to carve out decent chances despite their possession. Late on, sub Vedad Ibišević did hit the crossbar but ultimately, the hosts hung on to secure a superb victory and book their place in France next summer.

After an arduous, rollercoaster ride of a qualifying campaign, the Irish are finally there, and France will be all the better for having them! And as for that dodgy handball, it does (finally) cancel out Thierry Henry’s infamous indiscretion in 2009. 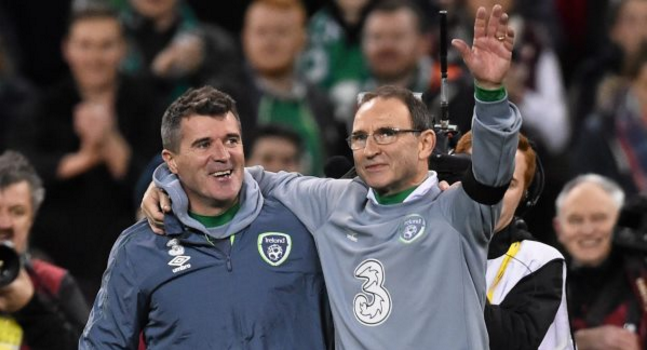