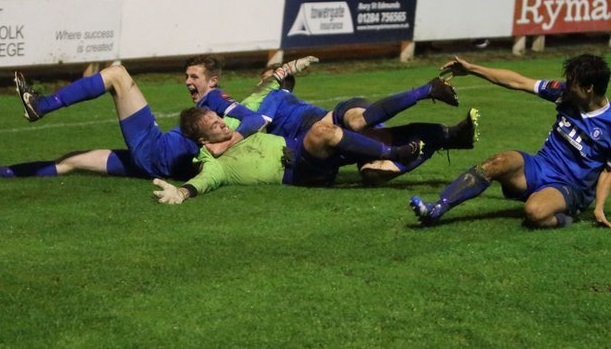 Saturday’s FA Trophy second round game between Bury Town and Herne Bay ended in chaotic scenes when the home side’s makeshift goalkeeper popped up with a 94th-minute equaliser to snatch a draw from the jaws of defeat.

The man in goal for Bury at the time was actually midfielder Craig Nurse, who was reluctantly handed the gloves when first-choice ‘keeper Neil O’Sullivan was sent-off in the 91st minute for deliberately handling the ball outside of his area.

Three minutes later, with his side trailing 0-1 and things looking desperate, Nurse tottered up for a later corner. The rest, as they say, is a replay at Herne’s place on Tuesday evening.

Thankfully, the cameras were present to capture the mayhem…

“There’s lots of firsts today – first time going in goal for a Ryman League club, first time scoring as a goalkeeper and first time being kissed by so many men,” Nurse told BBC Radio Suffolk after the match.