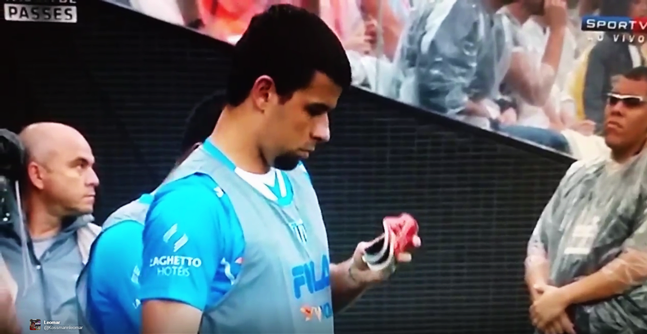 On the final day of the Brazilian Serie A season, relegation-threatened Avai went into their crunch game against newly-crowned champions Corinthians just one point ahead of Figueirense who, by virtue of being 17th in the league, occupied the fourth and final drop zone spot.

The equation was simple. Avai had to at least match Figueirense’s result against Fluminense to stay up by the skins of their collective teeth.

With things poised on a knife edge, Avai striker Andre Lima went to extremes to keep an eye on the Figueirense game – smuggling his mobile phone onto the bench by secreting it in his shinpad.

Lima was then spotted fixating on his pads during the match, and even began gesturing wildly for his teammates to start attacking when Figueirense went 1-0 up…

Alas, it all went awry for Avai, who could only manage a 1-1 draw as Figueirense successfully managed to hold onto their narrow winning margin to jump above Avai by a single point in the final standings, thus condemning their rivals to relegation.