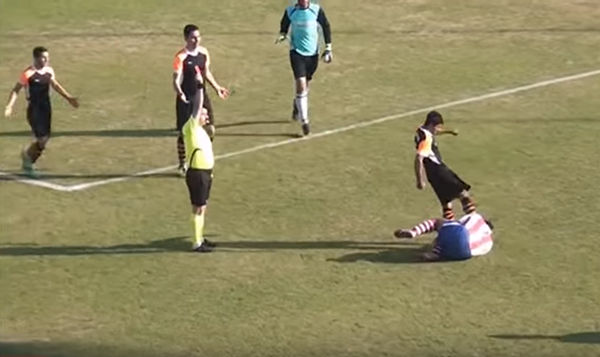 A Turkish footballer has been sacked by his club over a despicable bout of violent conduct in a recent match.

Mehmet Degirmenci, who played for Sanayispor way down in the amateur leagues, booted his prone opponent in the head in retaliation after being sent-off against Dallicaspor.

The victim, Kayhan Karakas, somehow managed to escape serious injury and went on to complete the match, but only after having nine stitches in his lip.

“Thank God that the kick came near my jaw,” Karakas said after the game.

“If it had hit me directly in the face, it could have broken my nose, made me blind or broken my neck.”

After footage of the shameful attack did the rounds earlier in the week, Sanayispor quickly moved to sever all ties with Degirmenci.

“He has been cut,” said the Sanayispor president in a club statement.

“On behalf of the management, we apologise to our opponents Dallicaspor and to our brother Kayhan.”