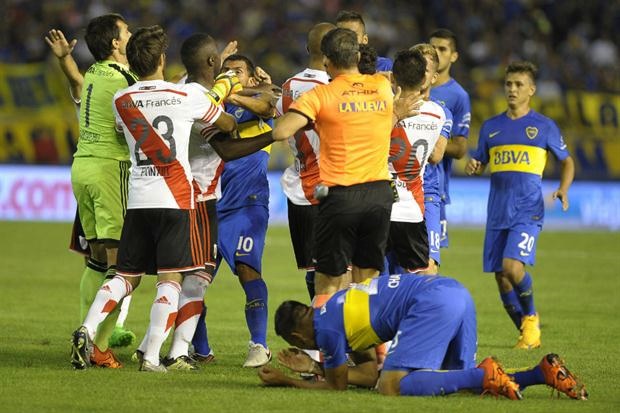 As unlikely as it sounds, Saturday evening’s pre-season ‘friendly’ between Boca Juniors and River Plate ended up a sparsely populated affair after no less than five players were dismissed before the final whistle.

Boca managed to add to the two players they had sent off during their midweek defeat against Racing Club by having a further three men dismissed against River, defensive trio Jonathan Silva, Gino Peruzzi and Daniel Diaz all being red carded at various intervals of the tumultuous Torneos de Verano fixture.

River were ever so slightly more cordial, having just two men jettisoned in the final 10 minutes – Jonathan Maidana for a head-butt on Carlos Tevez, which duly sparked a multi-man brawl that saw striker Leonardo Pisculichi shown a red card amid the ensuing melee…

Bloody hell fire. What happened to the ‘friendly’ part, chaps?