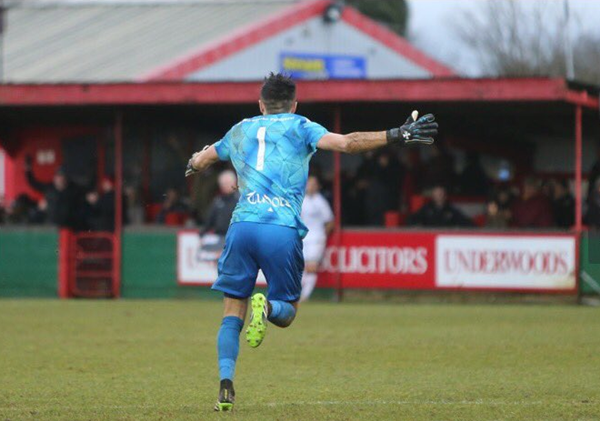 Hemel Hempstead managed to snatch a draw against Sutton United in stoppage time yesterday thanks to the scoring exploits of ‘keeper Jamie Butler, who plonked one in the top corner in the dying moments to rescue a point at the buzzer.

Somehow, the bounce managed to deceive opposite number Ross Worner as the ball wound up in the back of Sutton’s net (skip to 1:25)…

Here’s how the moment sounded over on NonLeagueLive, where Butler’s dramatic goal – fairly understandably – seemed to catch commentator Alex Weintroub slightly by surprise…

My first ever goal and don’t come much better than a 93rd minute equaliser from your own box into top bins ☺️🙌🏼⚽️ pic.twitter.com/eGudWDyzW6

Speaking to the Hemel Hempstead Gazzette after the game, Butler insisted his strike was more judgement than luck:

I was thinking ‘if this one goes on target it is going to be difficult to deal with’ because I saw it for myself in the first half. I really had to keep my eye on any long shots.

To be fair it couldn’t have gone more in the top corner if I tried so I’m very happy with it, and to get the draw is great. We never stopped fighting, never gave up, and in the end we got our rewards with two late goals.

Today is my first official goal, but I had said to a couple of the boys at the start of the season that I fancied myself to score this year. I didn’t think it would be like this, I thought it would be a quick free-kick or something like that.

We’re not entirely sure we believe he meant it, but still – well played that man!