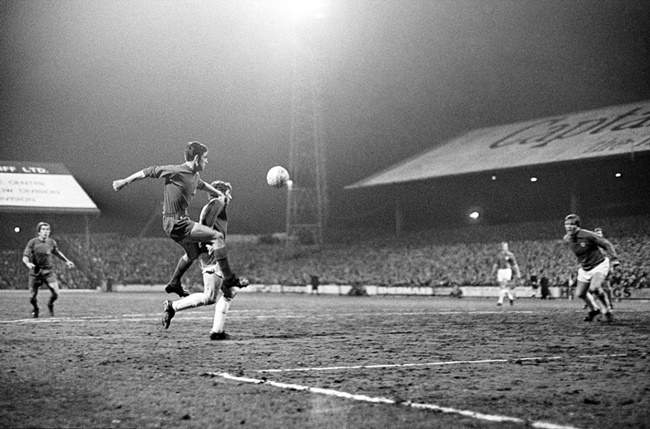 On 10th March 1971, Cardiff City pulled off one of the greatest results in their history, and one of the biggest upsets in the entire football pantheon, when they beat Real Madrid by a single goal to nil.

Riding high in Europe after becoming the first non-top flight club to reach the semi-finals of the Cup Winner’s Cup in 1968, the Bluebirds’ ’71 vintage went on to achieve something perhaps even more special against Los Blancos’ star-studded side.

It was Brian Clark who proved the difference by ramming home a header in the 31st minute to score the only goal of the game – his immortality duly sealed.

Sadly the euphoria didn’t last too long. Real proved too powerful in the return game at the Bernabeu, winning 2-0 to advance to the semis before eventually losing against Chelsea in the final.

Still, Cardiff will always have that glorious, glorious first leg to look back on…

Which all-in-all got us thinking about upsets in general.

A personal favourite, if only for the look on the bookie’s face as I collected my £120 winnings after having a cheeky punt on the game, was Cameroon’s 1-0 win over Argentina in the opening game of the 1990 World Cup.

Happy days in a glorious summer of football, with Cameroon’s Omam-Biyik (pictured below taking on Señor Diego Maradona) scoring the goal and writing himself into the history books. It wasn’t a bad tournament overall, if I remember correctly.

There’s always a Scottish angle to these shock defeat pieces, and Celtic oblige us this time with memories of the day they lost a Champions League tie to a team that sounded like an Eastern European night class offered at a local college.

Slovakian champions Artmedia Petrzalka didn’t have many Celtic fans too worried when they came out of the hat in the competition’s second preliminary round.

After they rollicked the Hoops 5-0 out in Bratislava, Celtic fans were left softly weeping into their Special Brew.

They still talk of the day during the 1966 World Cup when, at Ayresome Park, North Korea won their only game of the tournament against mighty Italy to send the Azzurri packing.

Pak Doo Ik got the winner, and picked up a new car for his efforts from the government when he returned home. Italy’s players received eggs and tomatoes from their irate fans.

In the summer of 2002, the French national side were reigning World Cup, European Championship and Confederations Cup champions.

The omni-champs faced little ol’ Senegal in the opening game of the 2002 World Cup. And lost.

Papa Bouba Diop scored the only goal after 30 minutes as France’s aura of invincibility quickly dissolved into the ether.

Perhaps the most unlikely of unlikely stories was the success of Hungarian side Videoton in 1985.

(If at this juncture you were to pipe up that the club was originally founded as Székesfehérvári Vadásztölténygyár SK then you’d be right, but that’s easy for you to say)

The point here is that they came from seemingly nowhere to reach the 1985 UEFA Cup final, beating PSG, Manchester United and FC Partizan on the way before losing to Real Madrid 3-0.

The Hungary Hippos (not their official nickname) promptly vanished from the continental scene for a while thereafter but, in recent years, have begun to re-establish themselves again.