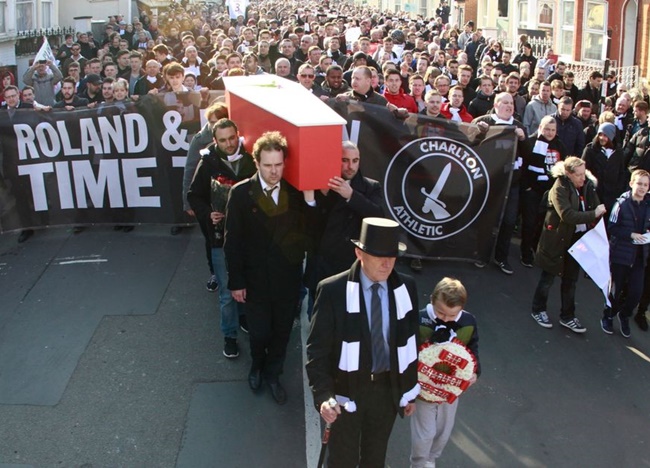 Charlton fans staged a mock funeral procession through the streets outside The Valley ahead of Sunday’s Championship game against Middlesbrough.

The march was part of further widespread protests over Belgian owner Roland Duchatelet’s shambolic running of the club as relegation to League One remains a distinct possibility (despite an upturn in form of late).

Similar to the scenes before Leeds’ game against Bolton last week, several hundred Charlton fans lined up and carried a mock casket around the ground to mark the untimely death of their football club…

Once under way, the game itself was also interrupted by further demonstrations, with an avalanche of beach balls being chucked onto the pitch causing first-half proceedings to by halted for almost four minutes…

Charlton fans halt the game against Boro with a beach ball protest. Where’s Darren Bent when you need him… https://t.co/jMWHmx9NMu

Just to finally ram their aversions to Duchaletet home, many fans also staged a 74th-minute walk out during the 2-0 win over Boro – 74 being the total number of goals Charlton have conceded so far this season.