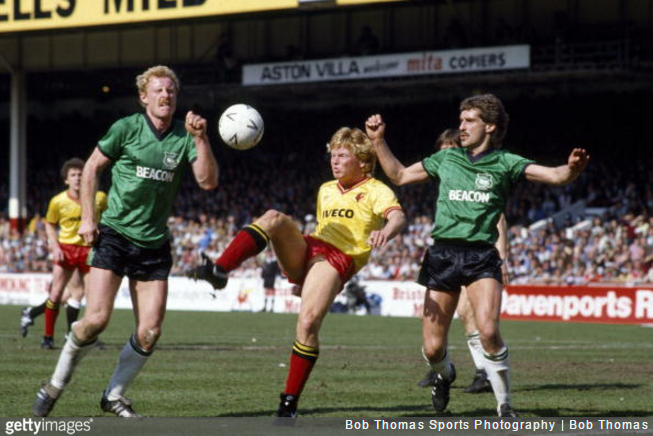 The Pilgrims’ progress in the 1983/84 competition had definitely caught the imagination, coaxing a whopping 20,000 travelling Argyle fans into making the 350-mile round-trip to the West Midlands in order to roar their team on.

Plymouth were bidding to become the first third division side to reach the final, and had beaten Southend United, Barking, Newport County, Darlington, West Brom and Derby County to reach the competition’s penultimate stage.

They gave a good account of themselves during the game, and were only beaten thanks to a motet of supreme skill from Watford’s John Barnes, who was one of British football’s most exciting prospects at the time.

Barnes collected the ball just inside Plymouth’s half and ran almost half the length of the pitch at speed before sending a sublime cross over from the corner for George Reilly* to meet with a flying header.

It was to be the only goal of the game but Watford knew they had been pushed close in an entertaining game in which Plymouth, managed then by John Hore, had won many friends.

Regardless of the result, the green and white section of the stadium partied hard.

*In a bizarre footnote, Reilly was attacked on a building site in Northamptonshire in 2003 and his ear bitten so severely he needed 50 stitches.

As he grappled with his assailant, the man reportedly whispered but two ominous words: “Remember Plymouth”.