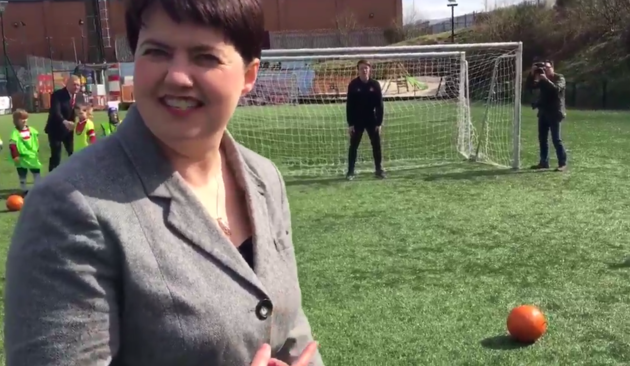 “Excuse me while I bury this sucker” (Photo: Aiden Kerr/Twitter)

If her recent visit to a Hamilton Academical youth training session is anything to go by, Scottish Conservative leader Ruth Davidson must be due a full international call-up in the non-too-distant future.

Asked to take a penalty in front of the STV cameras, Davidson first asked for a goalkeeper to beat and then, after joking that she hadn’t brought her boots with her, proceeded to dispatch her spot-kick with ruthless, nigh-on surgical precision…

Ruth Davidson just demanded a Hamilton youth coach goes in goal so she can hit a proper penalty #SP16 pic.twitter.com/WsA4tVWUO9

According to the internet, Davidson is a keen football fan and a staunch Dunfermline Athletic supporter by trade.

You’d never know it though, because she’s actually quite good.