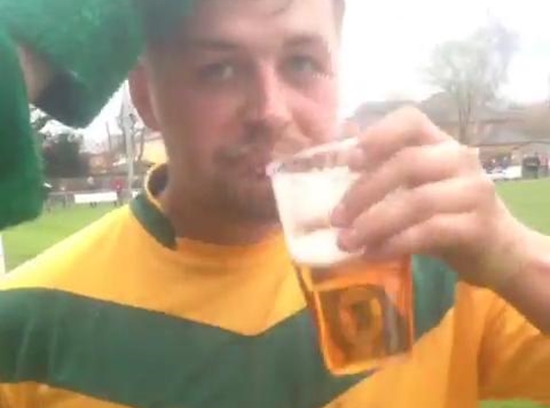 Horsham FC striker Terry Dodd has become something of a non-league superstar over the past few days after footage of his performance against Halisham Town began doing the social media rounds.

Having skipped in behind the defence with all the grace and ease of movement of an African antelope, Dodd proceeded to plop his shot into the side netting despite the Halisham goal being completely vacant.

Thankfully, our Terry was able to quickly drown his sorrows…

Given that he’d already scored a hat-trick in what was to be an 11-1 victory for Horsham, we can perhaps forgive Dodd’s post-sitter nonchalance.

That didn’t stop his little blooper from being big news on social media, which caused the West Sussex County Times to track him down for a natter:

I just never expected it to get how it has. There are two things I am good at, missing open goals and drinking beer.

It’s made me an internet sensation. It’s quite nice and it gives Horsham a bit of publicity and name.

The paper also report that Dodd managed to break a 44-year-old Horsham record against Hallisham by becoming the first ever player to score more than 30 goals in a single season.