On a momentous day of celebration at the King Power Stadium, unlikely champions Leicester City finally got their hard-working mitts on the Premier League trophy after beating Everton 3-1.

The Foxes won the league last week after Tottenham failed to beat Chelsea, but had to wait until after their home clash with the Toffees to finally lift the trophy after a brace from Jamie Vardy and a goal from Andy King secured a deserved win against Roberto Martinez’s visitors (who netted a consolation goal via Kevin Mirallas).

Earlier in the day, the suspended Robert Huth had promised he’d do a John Terry full-kit performance at the King Power…

And the Big German was true to his word… 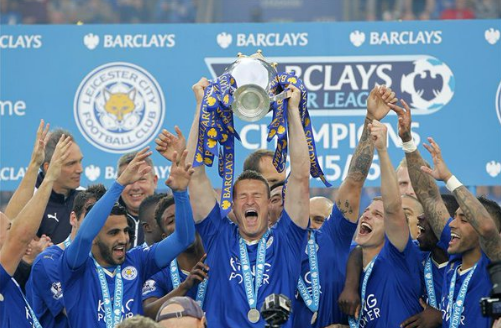 And there it is – Leicester City, champions of England pic.twitter.com/tODr9guA4D

Not much more we can say other than Dilly Ding Dilly Dong!