World champions Germany got off to the perfect start to their Euro 2016 campaign via a deserved 2-0 win against Ukraine in Lille. Shkodran Mustafi and sub Bastian Schweinsteiger got the goals for the Germans, however a superb piece of defending from Jerome Boateng was equally pivotal in the victory. 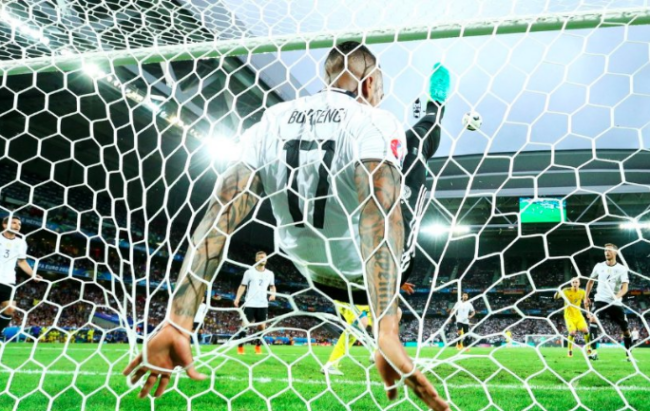 Boateng’s heroic clearance came in the first-half, with the Ukrainians pushing for a goal. Running back towards his own goal-line, the Bayern Munich centre-half looked to have deflected Yevhen Konoplyanka’s effort into his own net, only to somehow hook the ball off the line whilst falling backwards…

Overall, the Germans were far superior on the night, although defensively they looked vulnerable, with Ukraine going close on more than one occasion.

While Toni Kroos was outstanding in midfield, Mario Goetze struggled in a striking role. As for Mesut Ozil, the Arsenal man had a solid game, topped off by a superb assist for Schweinsteiger.

Oh, and manager Jogi Loew actually did this…

Does Jogi Löw realise the camera is always watching? pic.twitter.com/0It5UAKTK3

Jogi Löw gets the other side now. 😁😂 we all have our quirks. pic.twitter.com/w15P7KiZRd

Dirty, dirty fecker. And the immaculately-coiffed coach has form when it comes to disgusting antics on the bench (click here!).