Wednesday was a rather dramatic day at EURO 2016, with the teams from the final two groups, E and F, battling it out for a place in the last 16. Group F saw Portugal play out an entertaining 3-3 draw with Hungary.

However, the real story was the success of minnows Iceland, a country of just 330,000 people, who secured a place in the knockout stages courtesy of a last-gasp win against Austria.

Goals from Jon Dadi Bodvarsson and Alessandro Schopf balanced the game at 1-1, but with the game well into injury time, sub Arnor Ingvi Traustason netted a momentous goal at the far post. Not surprisingly, an Icelandic commentator produced arguably the greatest reaction ever recorded…

The result sees Iceland face England in the last 16, with the Three Lions just missing out on a clash with Cristiano Ronaldo and Portugal. Austria, who also missed a penalty in the game, go home after finishing bottom of the group. 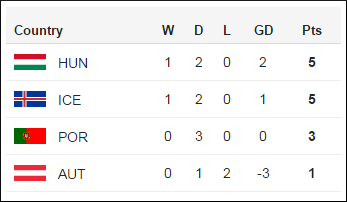