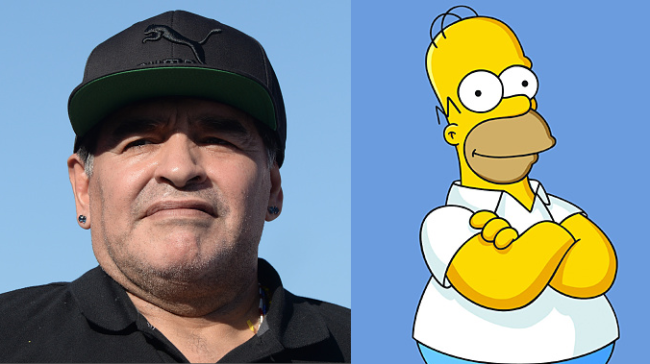 Diego Maradona managed to get himself into a bit of a quarrel on an Argentinian chat show recently when he made the frankly unforgivable mistake of bad-mouthing The Simpsons live on air.

Prattling on about the “awful” state of modern television, Maradona singled out The Simpsons for particular scorn, repeatedly stating for the record that he “hates” the programme and as a result “just can’t watch it” (if he’s talking about anything post-season 10/11, then we’re inclined to agree).

Anyway, Maradona’s derision prompted an angry phone call from actor Humberto Velez, who has provided the voice of Homer Simpson on the Latin version of the show for the past 15 years.

Velez was not happy, and as a result unleashed a venomous tirade, which began with him mistaking Maradona for Lionel Messi before continuing:

Now I remember who [Maradona] is. He is a big-titted fat guy. What he does is frankly stupid, I don’t think he is an individual worthy of us.

I think it is lovely that a fat kid from the south says this kind of thing.

He must have been somewhat more useless than me because he says purely idiotic things.

Woof. Both barrels. Here’s how the whole thing unfolded, complete with subtitles…

Gentlemen please, won’t somebody please thing of the children?