Aberdeen crashed out of the Europa League on Thursday night, in a nightmare game against Maribor which saw the Scottish Premiership side miss a penalty, have a player sent off and score the most appalling own-goal you are likely to see this season. 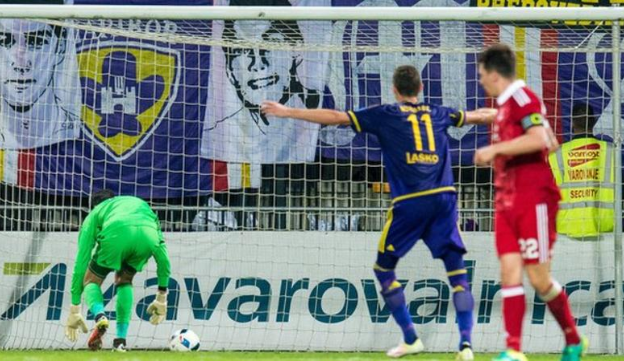 After the first-leg in Scotland ended 1-1, the game was perfectly set up. The visitors had their chances to win the game, with Adam Rooney’s spot-kick saved. However, if the advantage had been played Niall McGinn’s effort would have opened the scoring.

The sending off of sub Jayden Stockley for two quick bookings made things even harder for the Dons before, in injury time, a Graeme Shinnie backpass bobbled over the foot of ‘keeper Joe Lewis and into the Aberdeen net….

Aberdeen were knocked out of the Europa League after a 90th minute own goal last night- one of the worst of all time pic.twitter.com/72TuWGetfD

What a way to go out of Europe!

The game itself was understandably overshadowed by the recent tragic deaths of Maribor B team players Damjan Marjanovic and Zoran Baljak, who died in a car crash earlier in the week.

A minute’s silence took place before the game, while earlier in the day, Aberdeen manager Derek McInnes and captain Ryan Jack laid a wreath in honour of the two men.