Robbie Keane made his final appearance for the Republic of Ireland on Wednesday night, with the legendary striker netting against Oman to take his international tally to an incredible 68 goals in 146 senior games.

The Tallaght-born striker made his debut for the Irish back in March 1998 against the Czech Republic, with his first senior international goal coming against Malta in October of the same year. 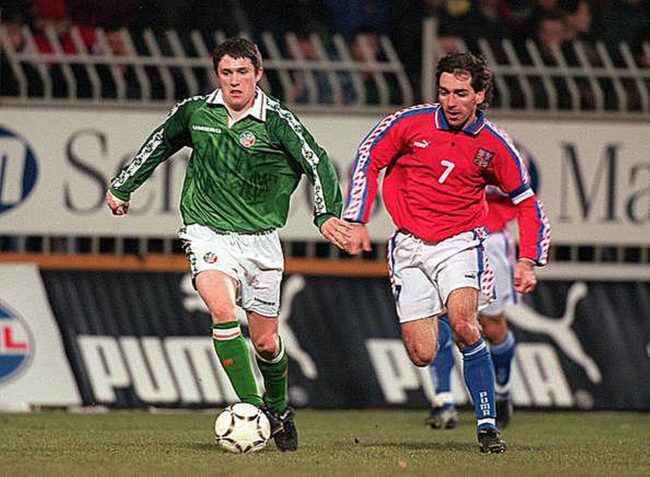 What followed was a fine international career which saw the poacher lead the line for the Irish at the 2002 World Cup, where he scored a dramatic equaliser against Germany in the Group Stages (video below), as well as appearing at both Euro 2012 and Euro 2016.

The LA Galaxy hitman started the game against Oman at the Aviva Stadium, and got on the scoresheet in trademark style, courtesy of a clever flick and volley.

That goal brought his tally to 68, level with German great Gerd Muller, with only Ferenc Puskas, Sandor Kocsis and Miroslav Klose apparently ahead of the Irishman in terms of senior international goals scored by a European.

Keane, who has enjoyed a superb club career with the likes of Wolves, Coventry, Inter Milan, Leeds, Liverpool, Tottenham and Celtic, was subbed off on 56 minutes to an incredible reception from the Dublin crowd.

What an ovation for Robbie Keane as he leaves the pitch for the final time in a green jersey! #ThanksRobbie https://t.co/sBVvc8hA3Y

After the game, Keane said:

It was very tough – it was an emotional night for me.

I just want to thank everyone who came along to support me and tell them that I’ve enjoyed every minute of my 18 years with the team.

Everyone wanted me to score and I’m delighted to finish off in this way.

I look forward to now sitting back and watching the team as a fan.

As for the game itself, Martin O’Neill’s side ran out 4-0 winners, courtesy of goals from Robbie Brady and Keane along with a brace from Jonathan Walters.

Oman are hardly top-class opposition, but O’Neill will still have been pleased by the energetic and positive display from his charges as they prepare for the 2018 World Cup qualification campaign.

However, the night was all about Keane, who signed off with yet another goal. Thanks Robbie!