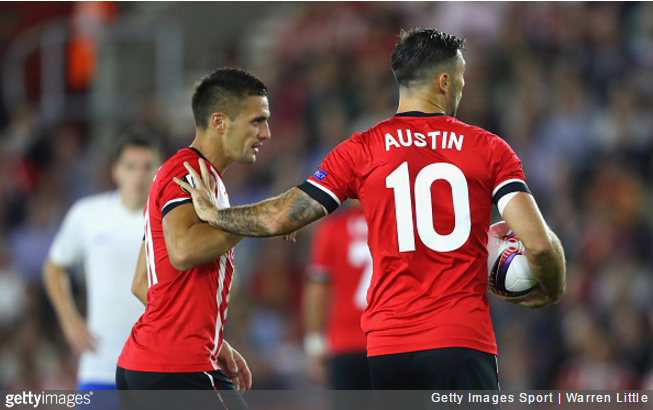 Southampton got their Europa League campaign off to a raring start with a comprehensive 3-0 victory over Sparta Prague at St Marys on Thursday evening.

Charlie Austin scored twice inside the first half-an-hour before his late replacement, Jay Rodriguez, emerged from the bench to snatch a third in the final minute of stoppage time to secure the Saints a first win under new boss Claude Puel.

Austin’s first goal came via a ridiculously harsh penalty, given for handball against Costa Nhamoinesu despite the ball travelling a mere matter of inches before clipping the Sparta defender’s arm.

The Southampton striker eventually stuck the resulting spot kick away, but not before briefly bickering with teammate Dusan Tadic over who was going to take it…

It’s a good job @chazaustin10 scores the penalty after a disagreement with Tadic. #UEL https://t.co/mlFzqRCpvY

Speaking to BBC Sport after the match, Austin admitted the squabble was “a bit silly”:

As a centre-forward I think I should take the penalties. I’ve come here full of confidence, even though I’ve not scored.

I put the ball on the spot and luckily it gave us a 1-0 lead. I think it was a bit silly from me and Dusan, but I’ll take the penalties in future.

Well, that’s that then.