From Eden Hazard’s infamous skirmish at the Libery Stadium to West Ham ‘s Adrian being hurried up by a Palace ballboy, we’ve seen more than one heated incident between the players on the pitch and those young whippersnappers charged with returning the ball.

This weekend in Belgium, there was another ballboy drama in Belgium’s Proximus league, with FC Tubize goalkeeper Quentin Beunardeau getting so worked up by the apparent time-wasting of a ballboy, that he threw the ball back in the youngster’s face. 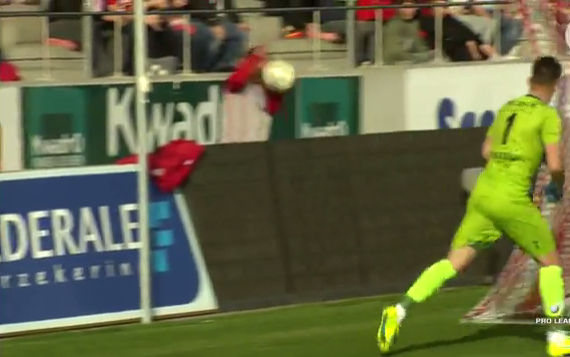 The incident happened during Tubize’s second-tier clash with Royal Antwerp, with Beunardeau’s side 2-0 down. The ballboy behind the goal was in no hurry to give the ball back to the ‘keeper after it went out of play, instead leaving it between two advertising hoardings.

Not surprisingly, this nonchalance annoyed the visiting goalkeeper, who rather lost his head and threw the ball at the youngster, aiming at the teen’s face.

The Antwerp players were understandably outraged by the actions of Beunardeau, leading to a bit of a stand-off before the ref branished a yellow card in the direction of the Tubize man…

At least the young lad didn’t seem too upset by the whole episode.