It’s the goalkeeper’s lot that any mistake he or she makes often leads to a goal and a shed-load of embarrassment. However, rarely we see a ricket as big as the one Fatih Öztürk pulled off during Akhisar’s Turkish Super Lig clash with Fenerbahce. 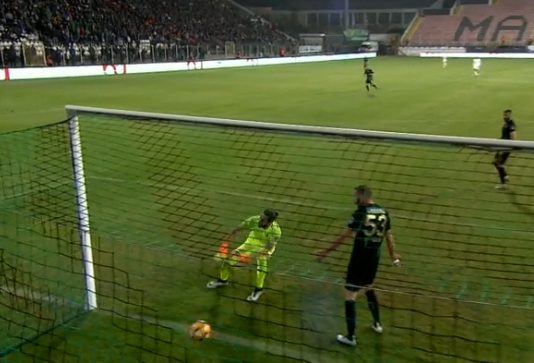 With Fenerbahce forward Emmanuel Eminike bearing down on the Akhisar goal, French ‘keeper Öztürk raced off his line and, initially, partly stopped the attacker’s lob.

However, with the ball bouncing slowly in the direction of the goal-line and a defender placed to stop it, the goalkeeper still managed to get himself into a totally unnecessary pickle, someone knocking the ball into his goal with his hand…

What an utterly appalling yet magnificently entertaining balls-up!

Fenerbahce would go on to win the game 3-1, a victory which comes on the back of their midweek Europa League win against Manchester United.