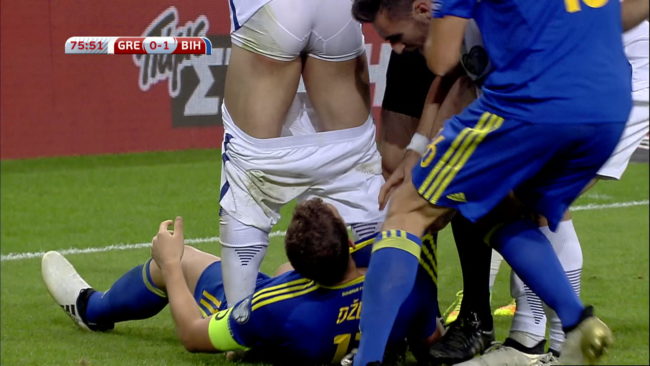 Edin Dzeko received a red card in rather bizarre circumstances on Sunday night, with the Bosnia & Herzegovina striker sent off during his side’s World Cup qualifier with Greece, after pulling down an opponent’s shorts.

The incident happened during the Group H clash in Piraeus, with Roma forward Dzeko, desperate to waste time with his side leading 1-0, firstly grabbing on to Sokratis Papastathopoulos’s leg before literally pulling down his pants…

The silliness from former Man City hitman Dzeko saw him pick up a second yellow and thus cop an early bath.

In the melee, Kyriakos Papadopoulos would also see red. However, Greece would ultimately nab a late equaliser via Georgios Tzavelas.

The result sees Greece stay second in Group H, two points behind leaders Belgium and three points ahead of Bosnia.