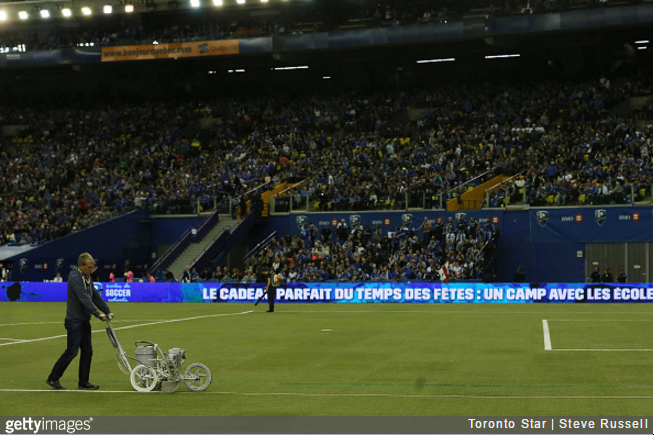 This was because, just before kick-off, it was noted that the penalty areas at Montreal’s Stade Olympique had been marked out three yards too narrow…

Update: The lines of the 18 yard boxes have been removed. #TFCLive pic.twitter.com/Ijz4dXCUIL

After the players left the pitch following their warm-up, the groundstaff emerged from the tunnel and began taping up the lines, spraying the old 18-yard box green and repainting the entire thing.

This from CBC Sports:

Seventeen minutes after the scheduled kickoff, the capacity crowd of 61,004 cheered as a worker came out to patiently paint the line with a push-machine.

He was followed by a man equipped with what looked like a leaf-blower to dry the freshly laid paint.

Thankfully, a little later than first billed, the match did eventually get underway with the areas freshly widened – Impact winning 3-2 on the night.