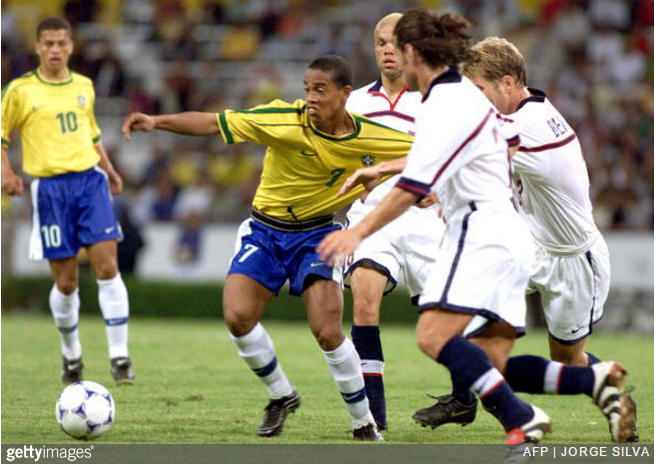 Ronaldinho is turning 37 years young today, so we thought we’d offer a simple tribute by traipsing right back to the far end of the Brazilian virtuoso’s career.

The year was 1999, and the Selecao were playing Venezuela in their opening match of the Copa America.

With Brazil already 4-0 up, a scrawny young bag of bones entered the fray in the 70th minute and promptly opened his international goal-scoring account just four minutes later.

Collecting a cut-back from Cafu, Ronaldinho nonchalantly flicked the ball over one defender, burst past another and rapped a shot past Renny Vega to score the fifth goal in what proved to be a fairly comprehensive 7-0 win…

Brazil went on to win the tournament, beating Uruguay 3-0 in the final thanks to goals from Ronaldo and Rivaldo (2).

As for Ronaldinho, he went on to score another 32 goals for Brazil in 97 appearances. He also did rather well for himself a club level too.

As you may or may not know, Ronaldinho actually inherited his nickname from Ronaldo (as in, Mr Nazario de Lima), who was referred to as ‘Little Ronaldo’ during the first few years of his international career due to the presence in the team of defender Ronaldo Guiaro.

A gawkier pair of sublimely talented footballing geniuses you could not wish to meet!