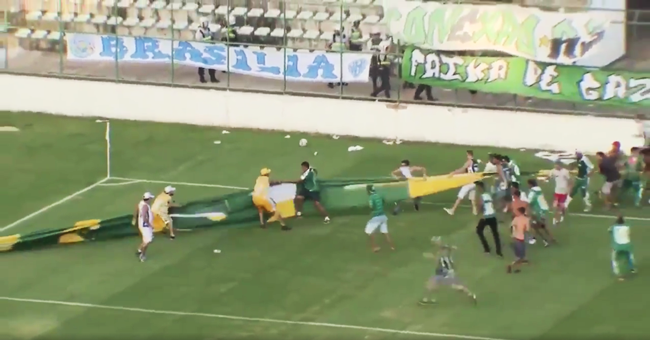 As if to encapsulate the wild west streak that still permeates the Brazilian domestic game, Sunday evening’s lower league match between Gama and Brasiliense escalated from a minor infringement in the midfield to a full-scale stadium evacuation in a matter of minutes.

It all began when two players ended up on the floor after contesting a straightforward header down on the touchline.

Convinced that the Gama forward was feigning his injuries, the Brasiliense team thundered in to remonstrate and it all kicked-off from there.

What ensued was a multi-man brawl with punches and kicks being thrown willy-nilly, which then spilled over into the terraces where fans began scuffling.

Several supporters then broke out onto the pitch, attempted to steal a banner from the opposite end and got duffed up by rival supporters as a result.

Tear gas was then deployed while stadium security police attempted to wrangle the hoodlums, as droves of fans scurried out of the ground and even clambered over the perimeter walls to escape…

Prepare yourself for this. This happened in the derby game between Gama and Brasiliense yesterday. pic.twitter.com/dU5wZIQPGr

Bloody Nora, it seems like every match in the Brazilian regional divisions is just a powder keg waiting to ignite.

The game was officially recorded as a 1-1 draw by the match officials – though who knows how, when or if the final whistle actually blew.