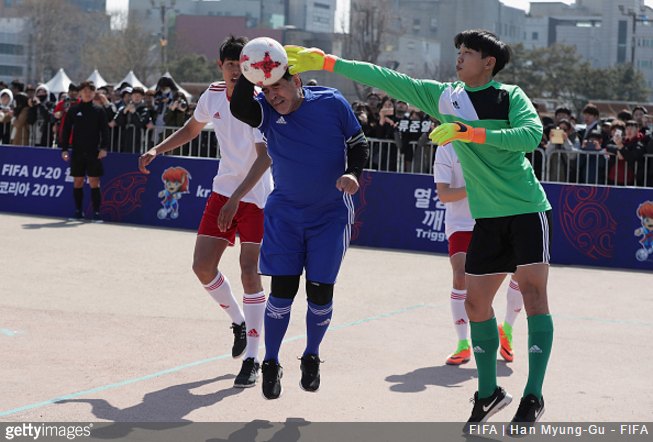 At FIFA’s behest, both Diego Maradona and Pablo Aimar flew into Suwon today to help publicise the draw for the upcoming Under-20 World Cup being staged in South Korea.

As part of the event, the Argentinian pair took part in a kick-about in Hwaseong Haenggung Square, which included a series of skill challenges and a mini 5-a-side match involving two teams of local kids.

Ever the jester, Maradona entertained the crowds by reenacting his ‘Hand of God’ goal against England  in the 1986 World Cup, leaping into the air (well, ish) to pat the ball past his opposing goalkeeper once again…

No remorse, even after all these years. Peter Shilton must be beginning to think that his apology isn’t going to come.

Indeed, Maradona then followed up by recreating his equally infamous ‘wide-eyed leer down the camera’ goal celebration against Greece at the 1994 World Cup, as can be seen by swiping through this ‘ere gallery…

The man just don’t give a shit.

Keep on keeping on, El Diego!