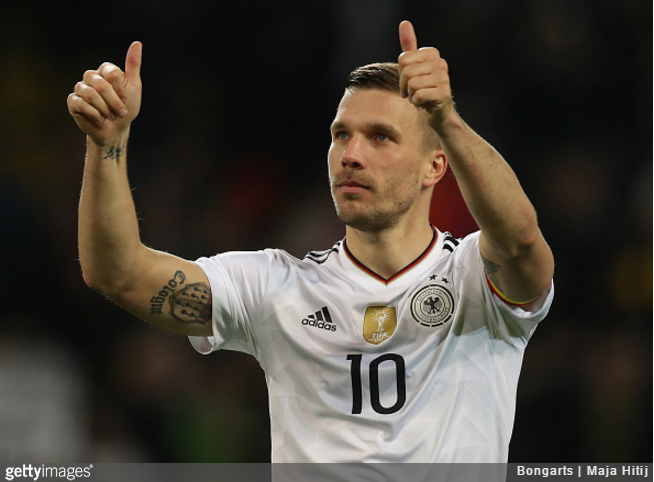 England were narrowly pipped by Germany in what ultimately transmogrified into a glorified international testimonial for Lukas Podolski.

Indeed, kick-off in Dortmund was delayed by several minutes while the man of the hour entertained the crowd with a dramatic reading of his farewell poem.

On the occasion of his 130th and final appearance for Die Mannshaft, Podolski signed off by scoring the only goal of the game – a 69th-minute dazzler that rocketed into Joe Hart’s left-hand top corner…

The goal, the 49th of Podolski’s international career, proved to be the highlight of an energetic, though slightly dull affair.

Unfortunately, there was at least one fan inside the stadium who managed to miss it…

Speaking of England fans, it was heartening to hear the dreadful travelling hordes roaring through their repertoire of war-related standards – 10 German Bombers, etc, etc. A credit to the nation, once again.

In a nutshell, an experimental England side pressed and harried dutifully while creating precious few openings, while a similarly lukewarm Germany simply went through the motions on their way to a barely-deserved win.

Michael Keane played well on his debut, with Adam Lallana (who hit the post on the break in the first half) also proving that when he’s on song, he’s probably England’s best player at the moment.

But this was Poldi’s night, and the 31-year-old certainly made the most of it…

Only Lothar Matthaus (150) and Miroslav Klose (137) have made more appearances than Podolski, while only Klose (71) and Gerd Muller (68) have scored more goals.

Not bad for a bit-part player.