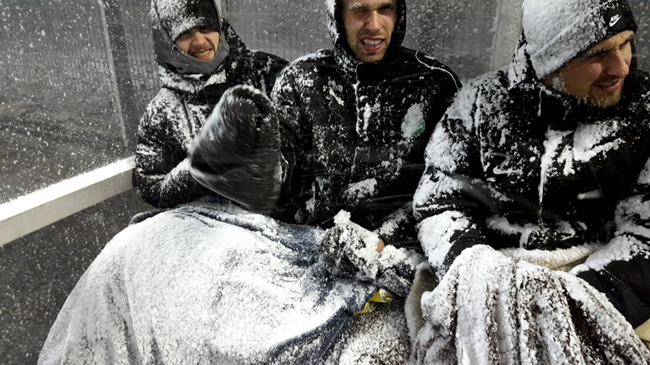 The Icelandic League Cup match between Fram and Breidablik had to be abandoned with 20 minutes left to play when a huge snowstorm engulfed the game.

Breidablik live-tweeted updates as the weather began to turn, including this snippet of their substitutes looking just a little bit cold around the edges…

Indeed, the away side were actually winning 1-0 win the referee eventually decided enough was enough…

As per the official match report posted on Blika’s website, the first-half conditions were described as cold but “quite reasonable” for Grafarholt (a suburb of Reykjavik) at this time of year.

The second, as you can see, was an entirely different kettle of rotting shark meat.

The Icelandic FA (KSI) have confirmed that the away side have been awarded a default 1-0 win, with the victors left to thank Kari, the Norse god of the North Wind, for helping them through into the next round.