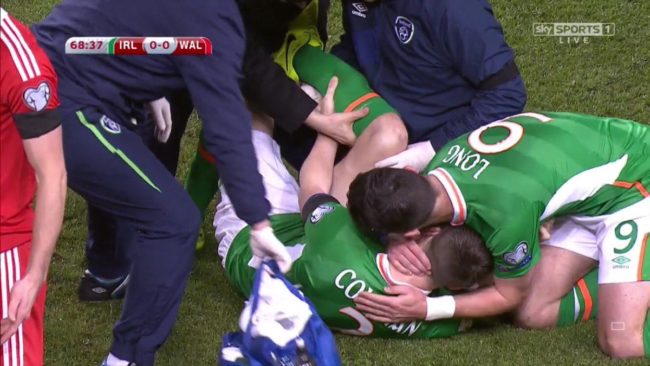 The Republic of Ireland and Wales played out a dismal draw at the Aviva Stadium on Friday night, with the goalless game overshadowed by an horrific injury sustained by Seamus Coleman.

The hosts provided little attacking threat, instead dropping deep to stifle the likes of Gareth Bale.

Real Madrid star did go close on a couple of occasions, but overall Wales themselves struggled to create enough decent chances in a dour encounter.

In the second-half, Bale was arguably lucky only to pick up a yellow for a foul on John O’Shea in the Irish box.

Soon after, and with the game heading for stalemate, Coleman found himself on the wrong end of an appalling lunge from Neil Taylor, with the Everton full-back stretchered off the pitch and taken to hospital with a broken leg.

Taylor rightly saw red for the horror challenge (cue ‘he’s not that kind of player’ nonsense) which set up a heated finale to the game.

With a one-man advantage, Ireland pushed for the winner, only to be thwarted by a stalwart Welsh backline.

The game would end goalless, a result which suits Martin O’Neill’s men more than it does Chris Coleman’s.

With Serbia winning in Georgia on Friday, Ireland go second in Group D, but still find themselves four points clear of the Welsh.

While the Irish will no be without the services of Coleman for the foreseeable future, Bale’s booking in Dublin means he’ll miss his side’s crucial clash with Serbia in June.