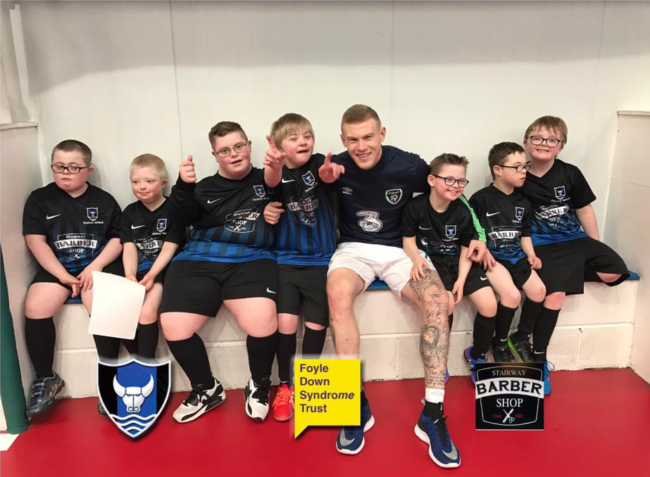 Formed in 2015, the Oxford Bulls from Derry have spent the last two years training hard and honing their technique.

However, the football team, comprised of young boys with Down Syndrome, have routinely struggled to find opposition to pit themselves against in competitive matches.

After hearing of their plight, Joe.ie put out an open plea on the Bulls’ behalf and, eventually, somebody out there answered the call.

That man was West Brom winger and Republic of Ireland international James McClean, a Derry lad himself, who assembled a ‘Select’ team to face the Bulls on Wednesday.

Kevin Morrison from Event Images was on hand to provide official match photography, and the following is taken from his Facebook match report:

Our boys were a bit star struck when he first walked in, but after James put them through their paces in the warm-up, they were ready to take him on.

The game itself was a tense, combative affair, but the Bulls eventually emerged victorious to record their first ever victory:

Tackles were flying in thick and fast, when the Oxford lads sneaked into a quick 2-0 lead – Conan and Keigan with the opening goals.

McClean’s lads gradually began to get back into the match when Nathan Moore scored the first of his 4 screamers from outside the box.

Tiernan and Man of the Match Kyle wrestled with the midfield and provided loads of ammunition for top scorers Keigan and Conan to test the visitors defence.

Shaun was detailed to stick to James McClean like glue and the West Brom star found it hard to shake off the attentions of the Bulls midfielder – who even resorted to hugging McClean at once stage to stop him in his tracks!

Meanwhile Adam had a quiet game – seemingly star-struck by the appearance of his Ireland hero on his home patch!

Jack had no such qualms about tackling the premiership star, and a few of JR’s tackles wouldn’t have looked out of place at Ravenhill.

The game was eventually decided by young Caoimhin who struck in the last minute to give the Oxford Bulls their first official win.

Here are the official highlights…

Morrison finished off with a heartfelt thank-you:

I just want to say a huge thank-you to James McClean and his mates for coming down to see our lads today and giving them their first big game experience!

The lads are still buzzing and our Adam is still a little Star-struck! And I don’t think James will ever appear in a more chaotic team photo as he did today, and yet he handled it with all such great patience and grace.

So thank you James and co. for a most memorable day!

You can read the full match report here, and the accompanying photos are just superb!

James McClean, eh? He’s definitely one of the good ones.