Hamilton Academical secured a 1-0 win at home to St Johnstone in the Scottish Premiership on Saturday, with Alex D’Acol the scorer of the winning goal.

However, the main drama in the game at New Douglas Park came on the stroke of half-time, with two St Johnstone players seeing red for fighting with each other. 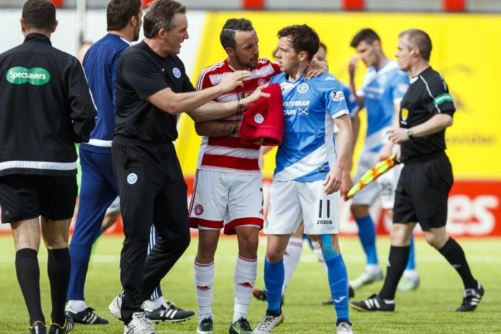 The incident happened at the end of the first period, when St Johnstone duo Danny Swanson and Richard Foster appeared to exchange some heated words.

That soon developed into a physical encounter, with Foster aiming a punch at his teammate, with Swanson then appearing to kick Foster in the face.

A number of other players and staff from both sides then got involved as the fisticuffs escalated before the teams disappeared down the tunnel.

At the break, it then emerged that the main culprits, Swanson and Foster has been sent off by ref Don Roberston, with a number of other players booked for their involvement in the fracas.

Ahead of the second-half, the New Douglas Park tannoy then cheekily pumped out both ‘Kung Fu Fighting’ and ‘Eye of the Tiger’ which should be applauded!

One presumes there will be a major inquest into the whole sorry affair.