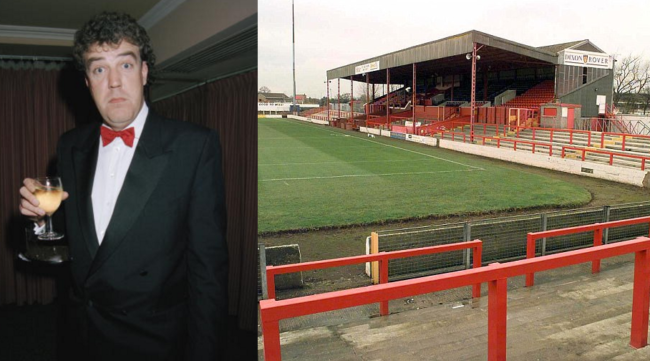 Filming a segment for his short-lived eponymous chat show, Jeremy Clarkson broke his duck and attended his very first football match in 1998.

Indeed, the Top Gear host paid a visit to his hometown club, Doncaster Rovers (bottom of the Conference at the time), to take in their FA Trophy tie against Frickley Athletic at Belle Vue in deepest, darkest November.

With the stench of London upon him, Clarkson does his best to pass himself off as a dyed-in-the-wool fanatic, but the real star of the show is Bill – the first Donny old-timer to show our clueless interloper the ropes with a few choice pearls of typical self-deprecating non-league wisdom…

All the joys of non-league football laid bare, with bonus points on offer for anybody who spotted a young(ish) Howard Webb on refereeing duty.

Fun fact: Shortly after Clarkson’s visit, Doncaster’s then-chairman Ken Richardson attempted to burn Belle Vue down in order to force the club to move to a new, bigger stadium.

The plot was bungled when the arsonist left his mobile phone at the scene, with Richardson eventually getting himself sentenced to four years in prison.