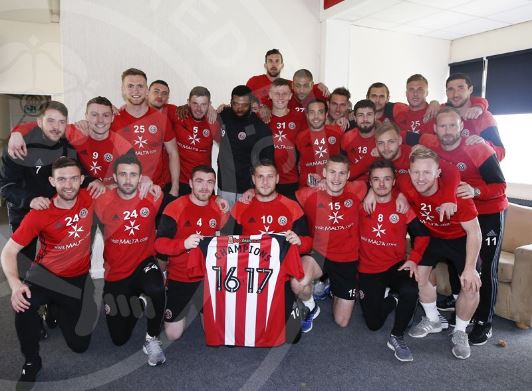 Sheffield United were crowned League One champions on Saturday, after second-placed Bolton Wanderers lost away from home to 10-man Oldham Athletic.

Courtesy of their 3-0 win away to Port Vale on Friday, the Blades were 12 points clear at the top of the second-tier table.

While United were already assured of a place in the Championship next season, Bolton’s defeat at Oldham, who had Michael Ngoo sent off for a second yellow, meant that the Blades were officially crowned champions.

After finding out the result of the Bolton game, the United players celebrated in classic champagne popping fashion at their training ground…

🎥 On the spot reaction from the training ground as the Blades are confirmed as Champions 🏆 #twitterblades #ForgedInSteel pic.twitter.com/YHjt0QzksW

United were last in the second-tier of English football back in 2010/11 while while it’s a decade since they graced the Premier League.

Fans of the club will now be hoping that can hold their own in the Championship next season and ultimately start to aim for the top-flight once again.