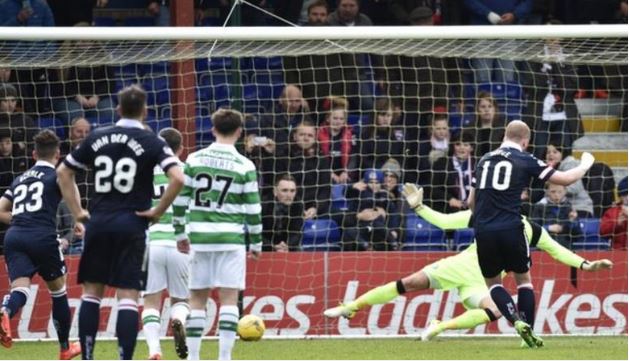 Champions Celtic were held to a controversial 2-2 draw in Sunday’s Scots Prem clash away to Ross County.

The Bhoys looked to be headed for yet another win when Ross County’s Alex Schalk pulled off an outrageous dive to earn his side a penalty.

Celtic took the lead through Kieran Tierney before Michael Gardyne headed home an equaliser in the second-half. On 78 minutes, Patrick Roberts put the visitors ahead again, only for the game to end in controversy.

Getting to ball first in the Celtic box, Schalk theatrically threw himself to the floor after Erik Sviatchenko pulled out of a challenge on the Ross County man.

However, ref Don Robertson was fooled by the dive, immediately pointing to the spot…

shocker of a decision pic.twitter.com/3xH554UNPu

Liam Boyce converted the resulting spot-kick to earn his side a valuable draw, as they go three points clear of the relegation zone.

I’ve seen some really bad decisions up here [in Scotland] but I’ve got to say, that’s the worst I’ve seen.

Players will do that, it’s always happened. That is blatant cheating and it’s an awful decision to cost us three points.

And for the referee to miss some crucial decisions, it’s very disappointing.

Soon after the penalty, Celtic captain Scott Brown was dismissed for a lunge on Boyce though the club are set to appeal that decision.

As for Schalk, he should hang his head in schame!