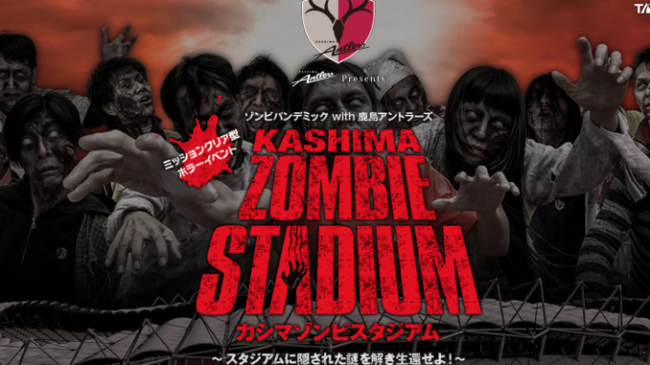 In what surely must be a first, Japanese side Kashima Antlers are preparing to host a special event next month that will see their stadium turned into the ground zero of a zombie apocalypse.

In collaboration with video game developers Taito, the J. League champions will stage a “zombie escape” experience at Kashima Stadium in which paying customers will be tasked with… well, escaping from a horde of blood-thirsty zombies.

The club have released an eerie trailer, which shows ex-Antlers midfielder Koji Nakata attempting to make it out of the dressing room alive after his teammates suddenly come down with an acute case of living-dead-itis…

Should you be interested, Football Tribe Asia have a few more pertinent details:

Participants will work to solve puzzles in four areas and discover a “cure” for an infestation which has struck members of a Kashima Antlers Legends team while avoiding capture by zombies roaming the grounds.

Fans who clear all four areas as well as a bonus puzzle will be entered in a lottery to win prizes such as autographed uniforms and used match balls.

The event, which will also feature retired Antlers players Yutaka Akita and Akira Narahashi, is recruiting volunteers to act as zombies and self-defence force members.

Right, time to let rip with that ‘Man City have been staging abandoned stadium events for years now’ joke you’ve been sitting on.