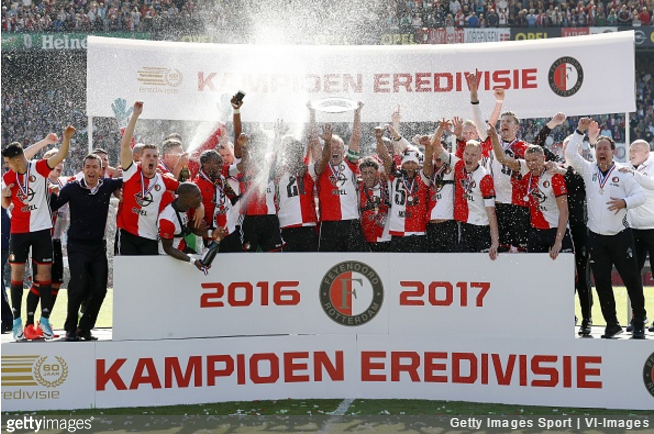 With Ajax just one point behind them going into the final match of the season, a hat-trick from captain Dirk Kuyt saw Feyenoord beat Heracles 3-1 and more importantly take the three points they needed to shore up the club’s first Erevidisie league title since 1999.

In doing so, Feyenoord also became the first team in the history of Dutch football to top the Eredivisie table for the entire season.

Curiously, the win also maintained the run of red-and-white dominance at the summit of the Dutch game, with the title having only been won by a club sporting those particular colours for the past 53 years. How about that?

Of course, the chaps from Rotterdam celebrated in style, with Kuyt helping himself to an entire bottle of Vimto served on the Eredivisie dish itself.

After drinking their fill of fizzy pop, the Feyenoord team and their victorious coach Giovanni van Bronckhorst then reconvened to show off their new trinket to the legions of fans gathered on the Coolsingel, slap, bang in front of the town hall…

What better way to celebrate a truly historic sporting moment that with Euro-trance bagpipes being blarted out at tinnitus-inducing levels?