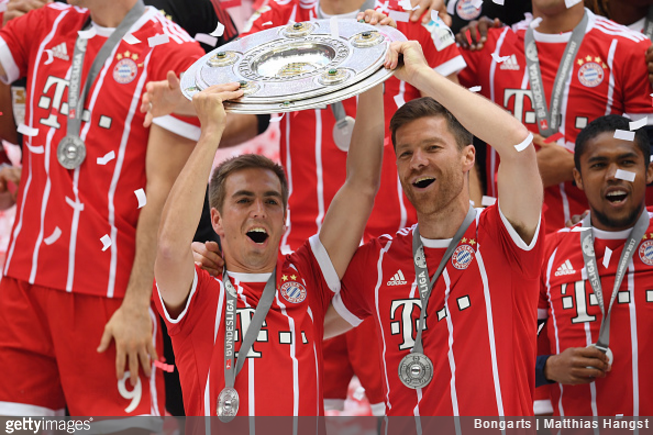 Bayern Munich turned their final game of the season into a massive farewell party as the club waved off three long-serving players into retirement.

A small ceremony was held before kick-off in which, ahead of his 517th and last appearance for Bayern, Philipp Lahm was presented with a bunch of flowers, a personalised golf bag and a banner in the crowd that read “From a child of our own to a legend of our club”…

The Bavarians subsequently beat Frieburg 4-1 at the Allianz to ensure they ended the Bundesliga season unbeaten at home, before 75,000 people said their goodbyes to Lahm, Xabi Alonso and veteran goalkeeper Tom Starke.

Both Lahm and Alonso started the match only to be subbed off in the latter stages to a couple of standing ovations.

First to bow out was the Spanish midfielder, who made way for Franck Ribery in the 83rd minute…

Xabi Alonso received a standing ovation in his final ever game 😢

A fitting farewell for a legend! pic.twitter.com/OO1LE3SSiM

Then off went Lahm just a couple of minutes later…

Philipp Lahm leaves the pitch for the final time…what a career!

One of a kind 👏 pic.twitter.com/oGHvQwrZKG

The final whistle sparked a fresh wave of celebrations as the Bayern boys were presented with the Bundesliga shield.

Then, as is the done thing in times such as these, the Paulaner beer started to flow, quite literally in fact…

Tremendous stuff. You’ve got to hand it to Bayern – they certainly know how to chuck a party.

We dare say more than a few tears were shed, but what a fitting way to clap off a couple of bona fide modern day legends.