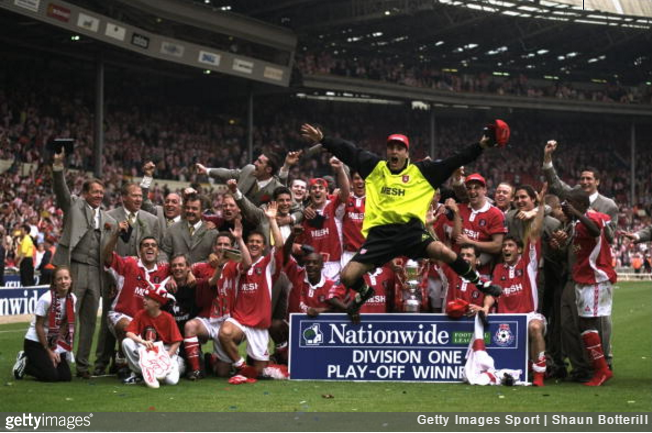 Quite possibly the most exciting, blistering play-off final ever witnessed at Wembley took place, 19 years ago to this very day.

Sunderland-born Clive Mendonca scored a famous hat-trick (the first ever in a play-off final) against his hometown team as Charlton Athletic squeezed their way into the Premier League via a synapse-fraying penalty shoot-out.

Charlton boasted the First Division’s top goalscorer in Mendonca, but they were up against Sunderland’s formidable front pairing of Niall Quinn and Kevin Phillips.

Sure enough, a goal-fest ensued – the score being 3-3 after 90 minutes and then 4-4 after 120 minutes before promotion was eventually settled by a penalty shoot-out which went 7-6 in the Addicks’ favour…

One of the greatest #PlayOffFinal matches of all time… pic.twitter.com/rpiGImK52O

Michael Gray, he too a Sunderland native, was the unlucky man to miss the decisive spot-kick, later admitting that he just wanted “somebody to hug him” after watching Sasa Ilic gather up his fatefully under-hit effort.

And so, Alan Curbishley (remember him?) and his merry mob found themselves ascending to the promised land of the top flight for the first time in nine seasons, where they duly remained for all 10 months.